This morning was a late start. Terry had put a dent in the whiskey last night and Eli was sleeping soundly. Everyone was eventually up around 9am so we headed back into downtown for breakfast. I glanced at the flags lining the street to see them all flapping the wrong way, today was going to be another hellish headwind. Before setting out I went to a store to grab supplies for the ride it was 11am by this time. The women in the shop, which was apparently famous for a huge Jackalope model, questioned why I would do a trip like this. “It just doesn’t seem like fun” she said. Neither does standing behind a checkout till all day you fool I thought. 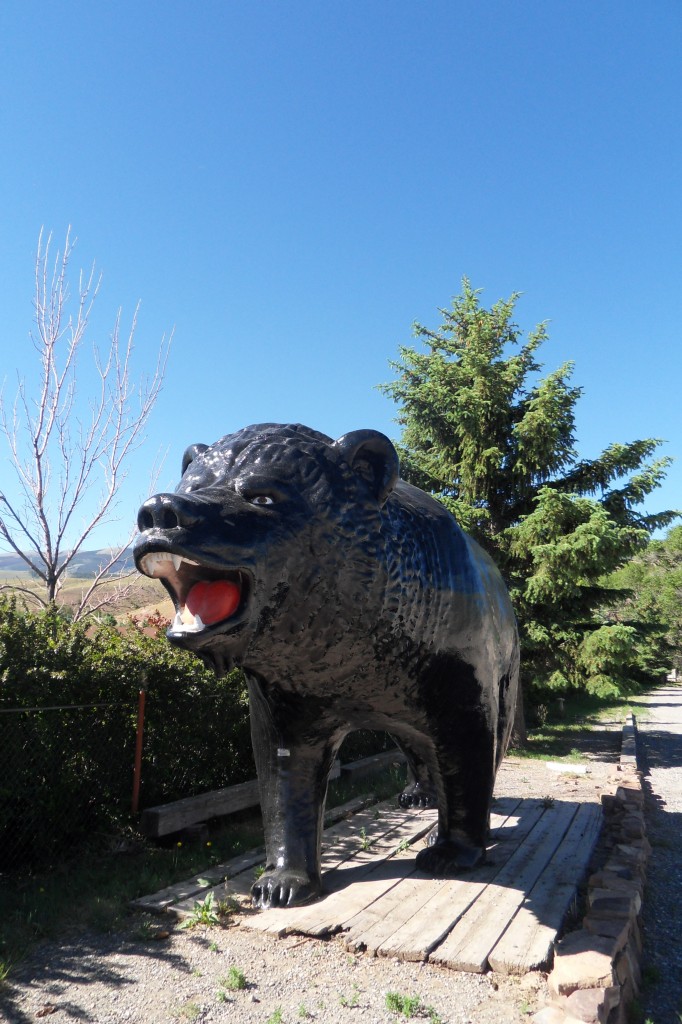 There was a large early climb of Togwotee Pass which was made incredibly difficult by the headwind. Today wasn’t going to be about speed but persistence, I’m not in a hurry anyway so it doesn’t matter. Halfway up one climb a women pulled over on the other side of the road and jogged down the hill holding something in her hand. She clapped and said “Bravo!” and “Keep riding!” while she handed me a chunk of gourmet fudge as I passed. It tasted amazing and the strange event was enough to let me forget about the headwind and just enjoy the scenery whilst crawling at 4.2mph. Some of it was possibly the best yet, around each corner huge spires dusted in snow climbed above the tree line. This was now grizzly country so I’m staying extra vigilant, the signs dotted along the roadside don’t let you forget. I’ve rode and camped through black bear country but thats hardly a concern really, Grizzly is a different ball game. 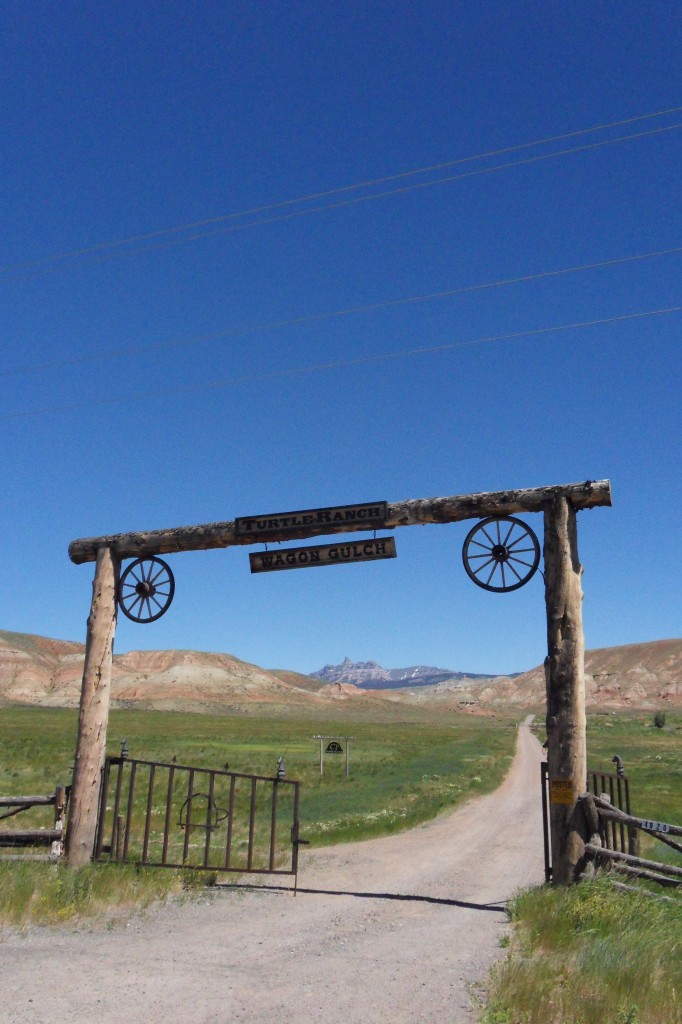 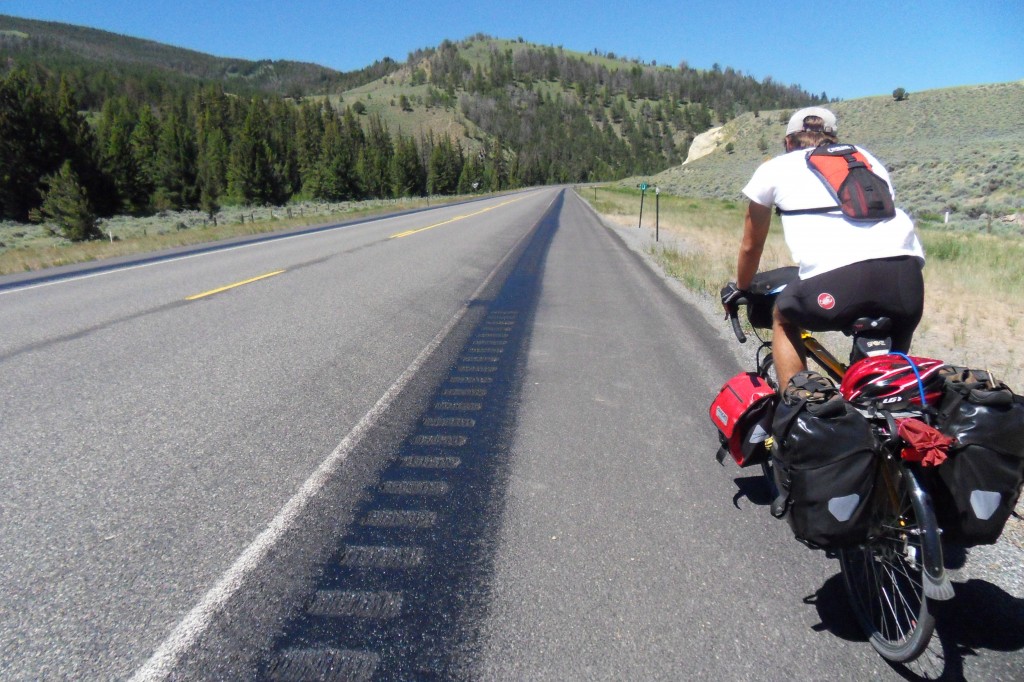 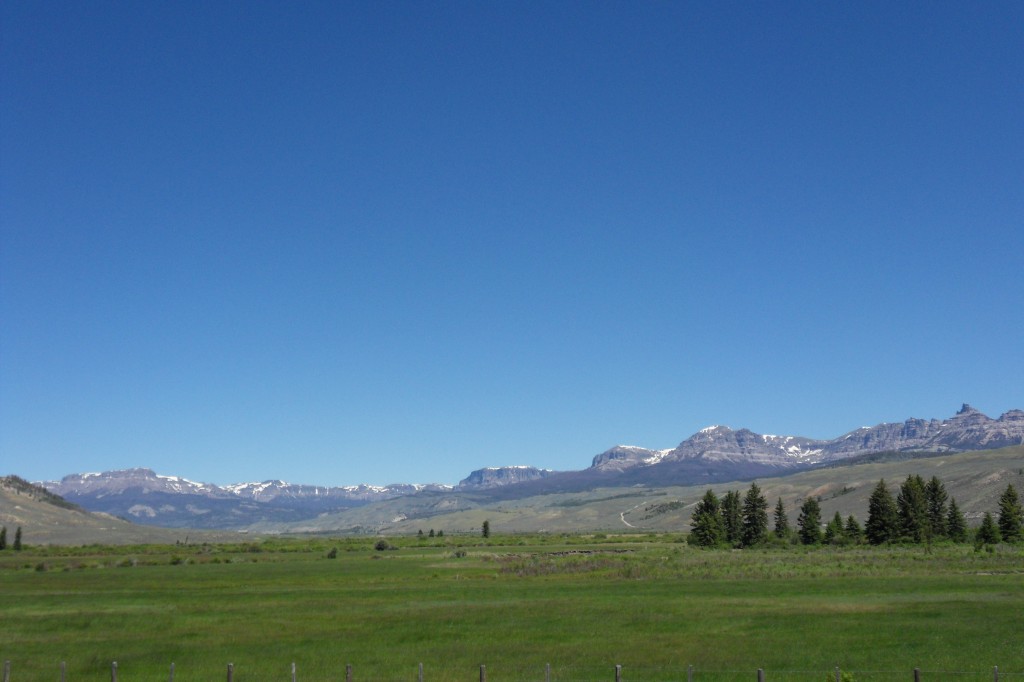 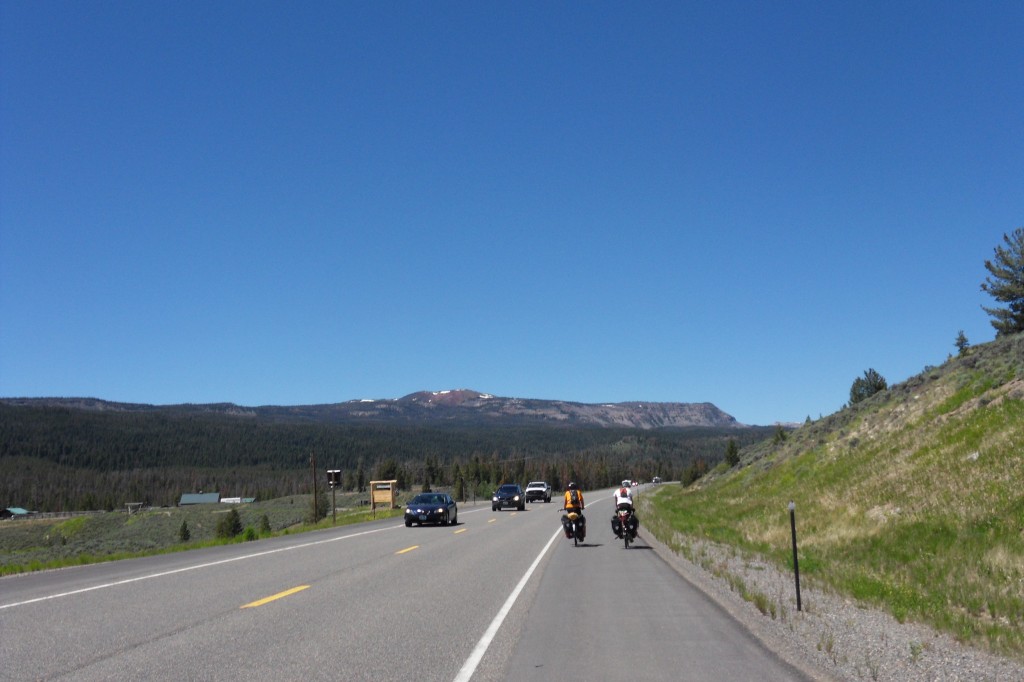 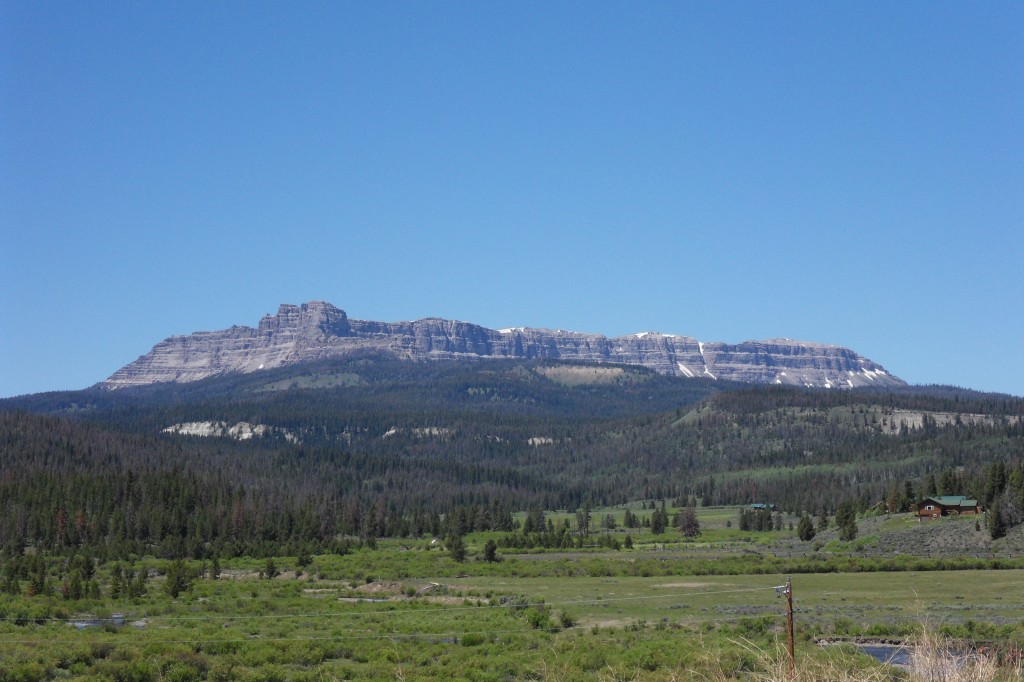 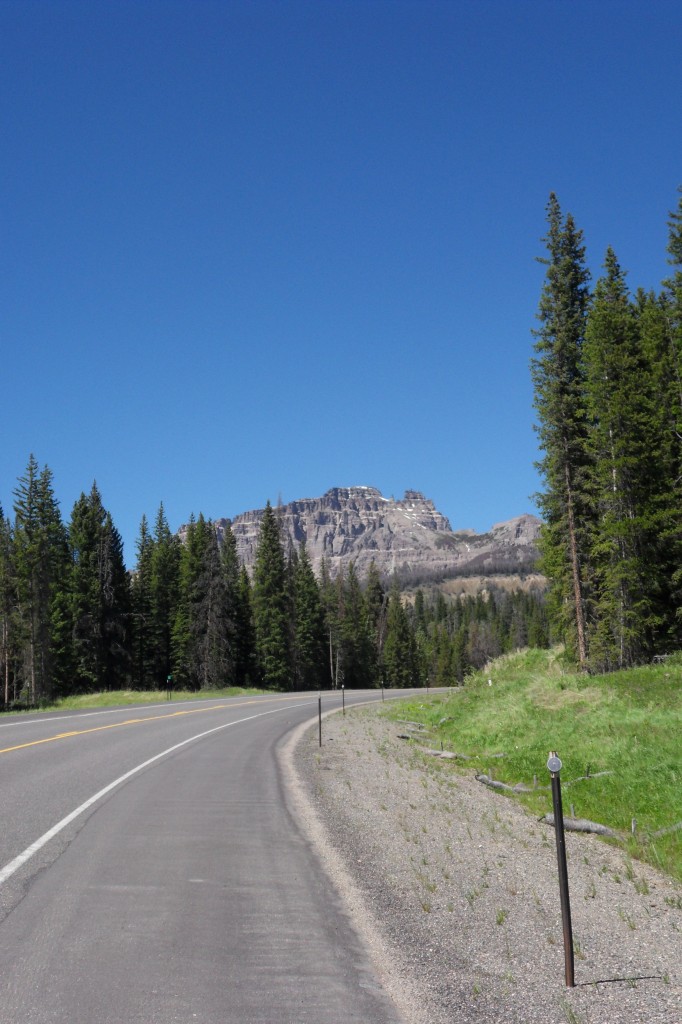 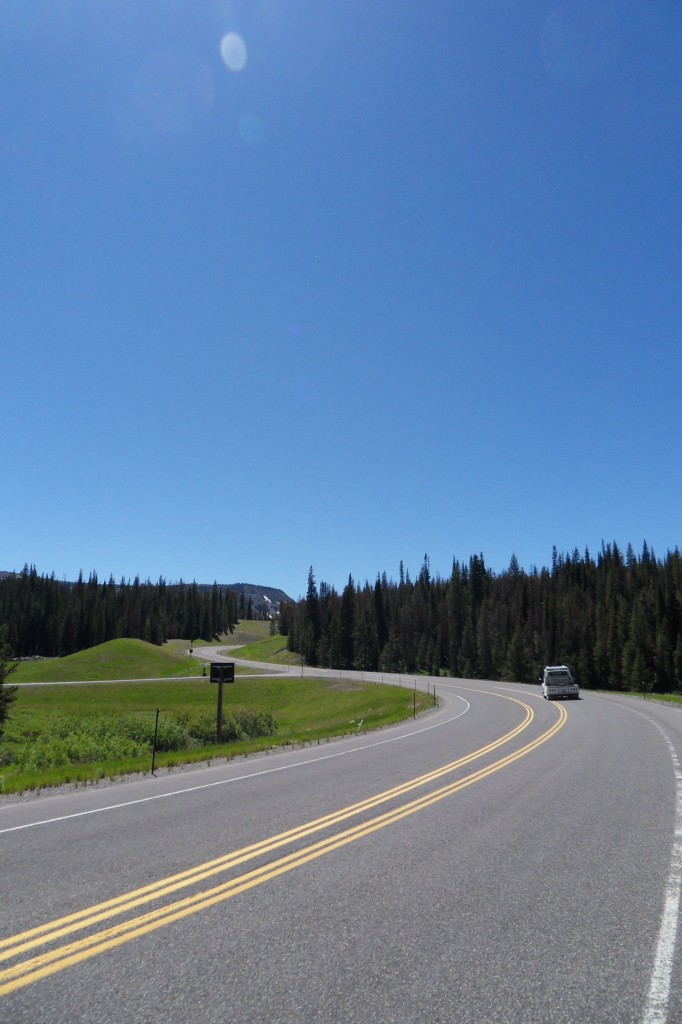 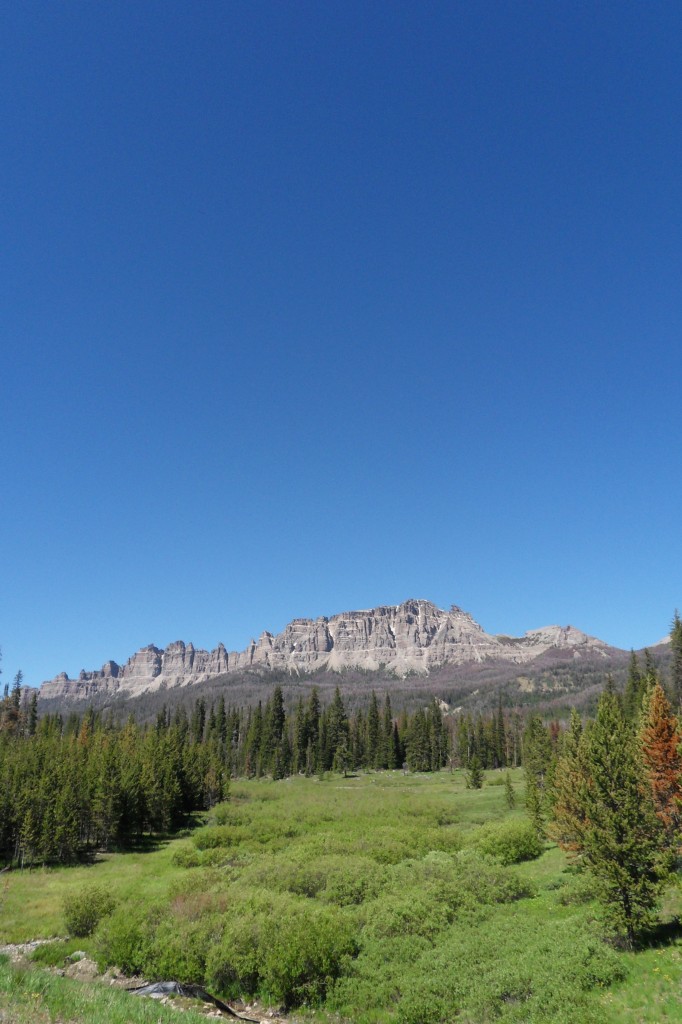 There was lots of construction work up on the pass and after climbing over the top we were stopped. JCB’s and cranes we shifting mud about re-laying a section of the road, this one we couldn’t walk through but a pilot car lets you stick your bike in the back and takes you past all the machinery. In the brief conversation he claimed to see 8-9 grizzlies a week up here and that two campgrounds in Grand Teton national park were closed last week due to increased activity. Once past the construction we found the others from last night and began to enjoy the rest of the 17mile decent. At this point there was 6 of us riding together. I love how flexible doing the trip like this is, people come and go as they please, you can ride alone for a while then with company at times to talk. The group is constantly expanding then dispersing and at any given time we could all be riding separate again. 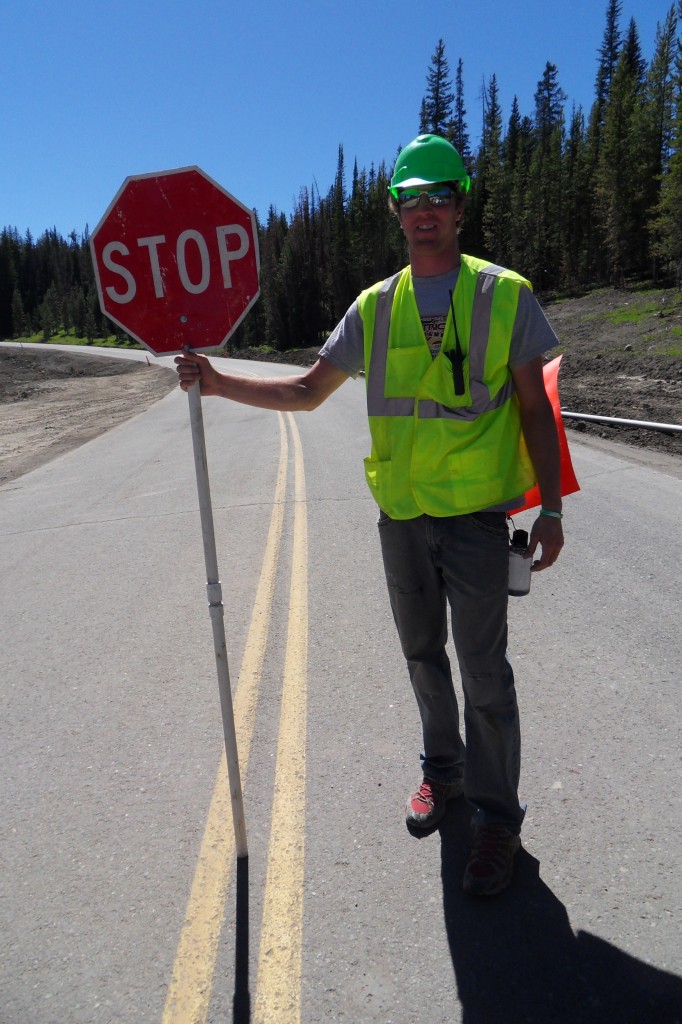 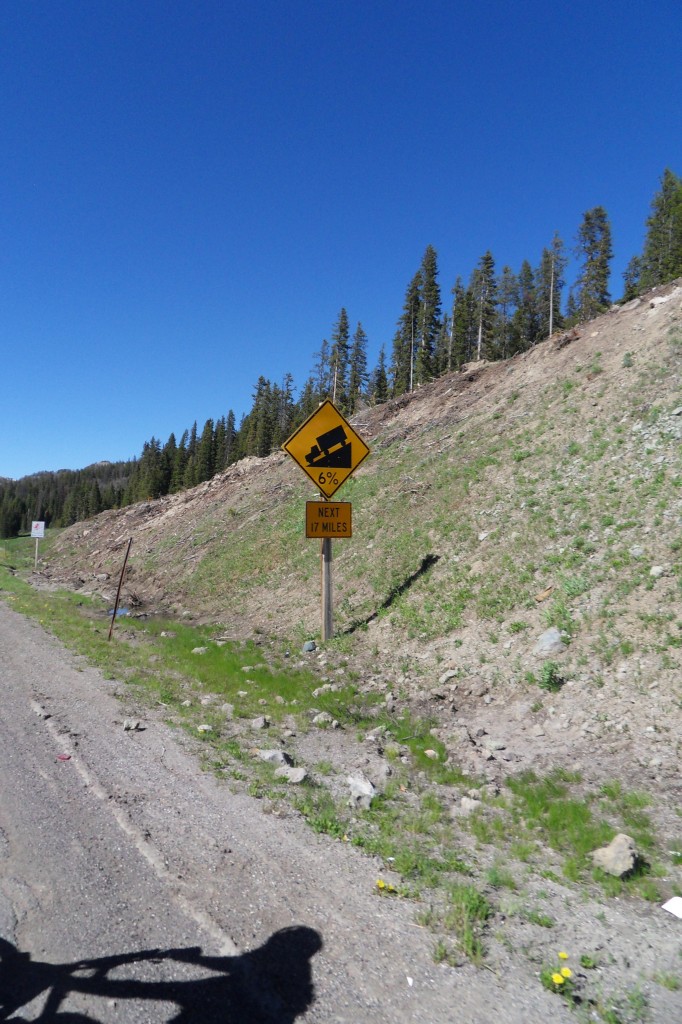 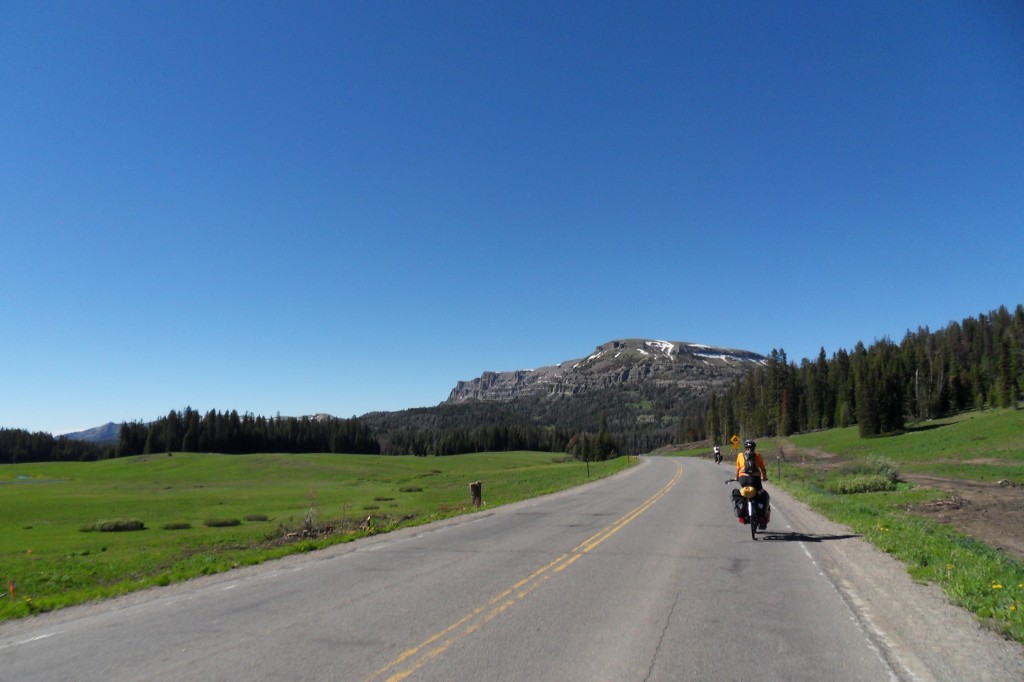 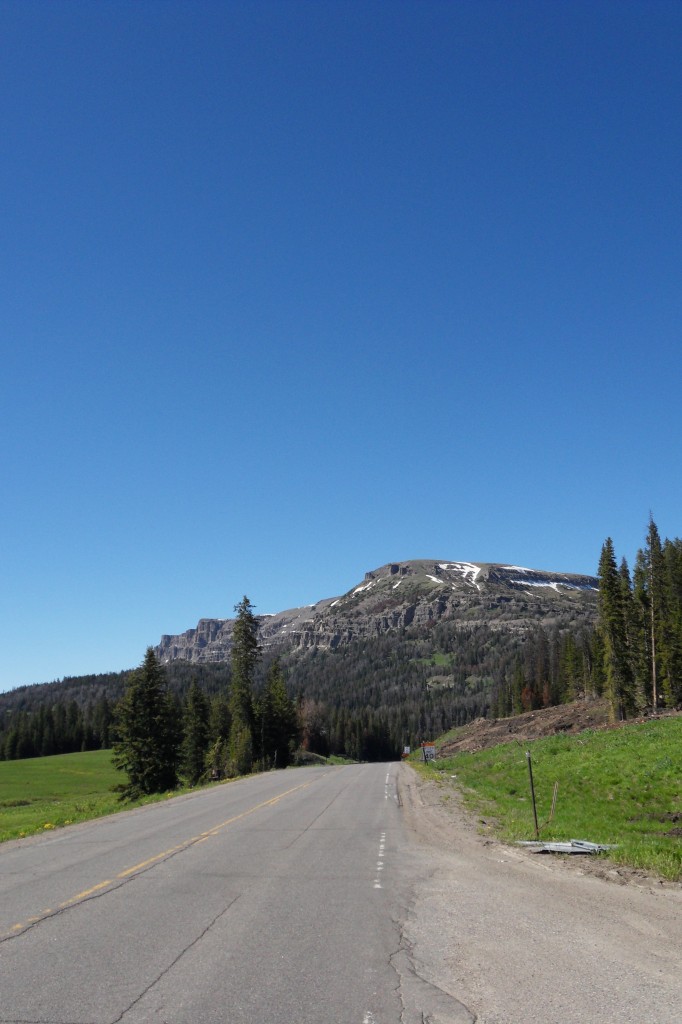 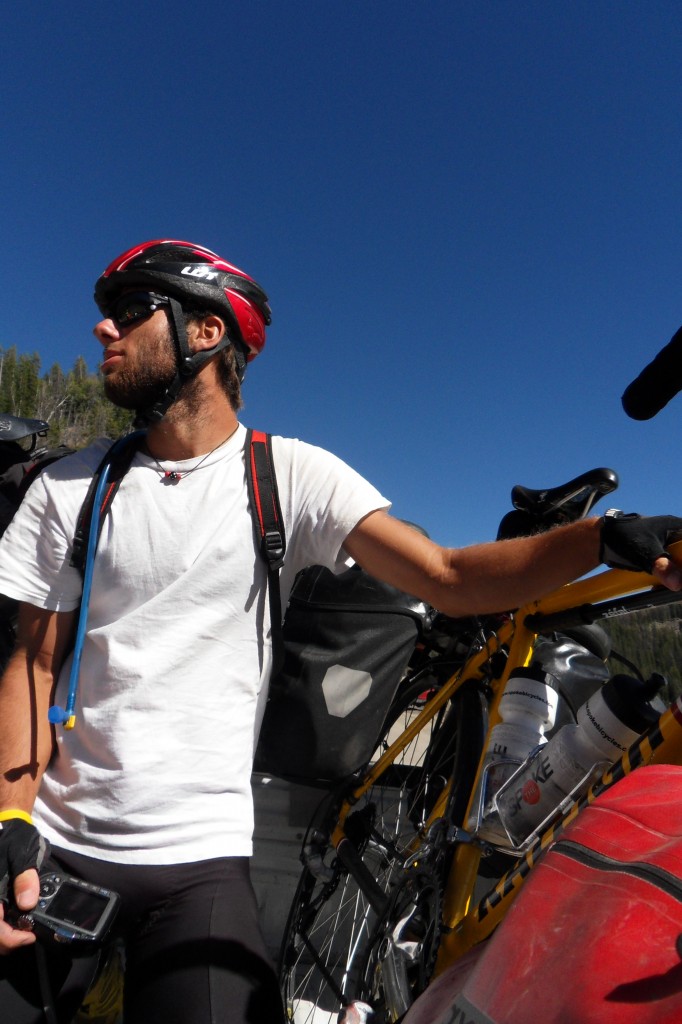 We got our first glimpse of the Tetons and they looked amazing, each turn took us closer. We had planned on camping at Colter Bay in Grand Teton national park tonight, this is where Eli would be leaving us as he is going to stay with friends in Jackson just off route. Down the road his ride came to pick him up and we said our goodbyes. He is cutting through Idaho and should meet us again at the start of Oregon which will be great. Like I said in the last post, even though its only been two days riding, they have been some of the longest days on the trip due to the headwind so its felt like weeks. 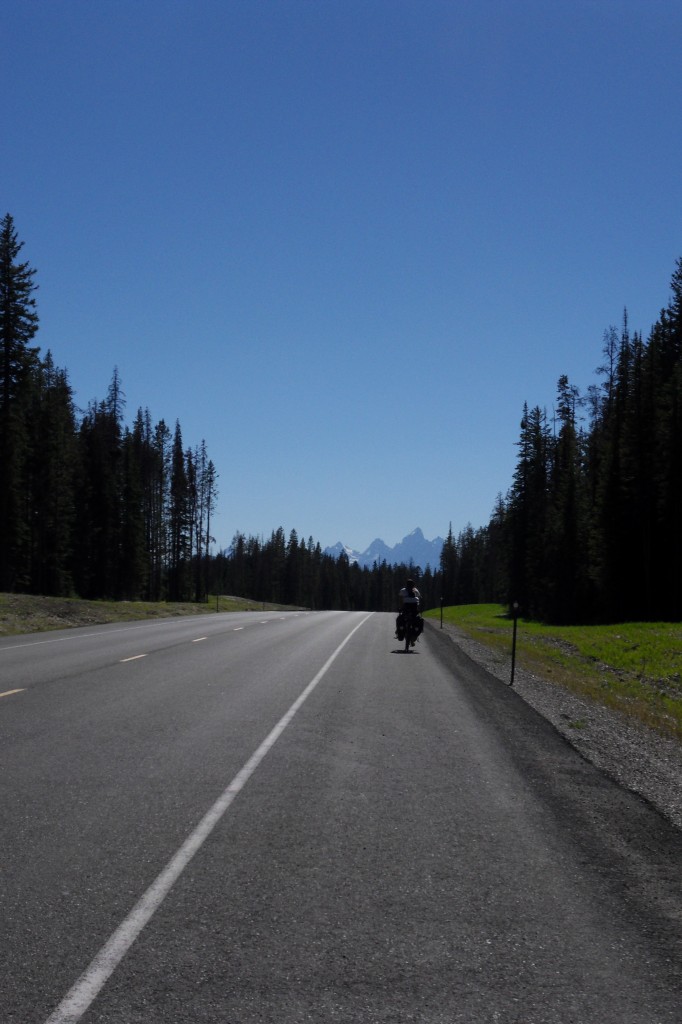 We get to the entrance of the park and are told all campsites are full. The maps specifically point out they have hiker/biker walk in group areas for us to stay at. The woman doesn’t seem to compute and continues to tell us all sites are full. From the entrance its about 15 miles to the site, or its around 5 miles back from where we just came to a previous one. Its getting dark so we decided to just head back and find they have campsites for $40 a night or cabins for $50, so we take 2 cabins between the 5 of us. We sit and chat through the night until it gets cold and head inside, I can’t wait to see the Tetons in full view. 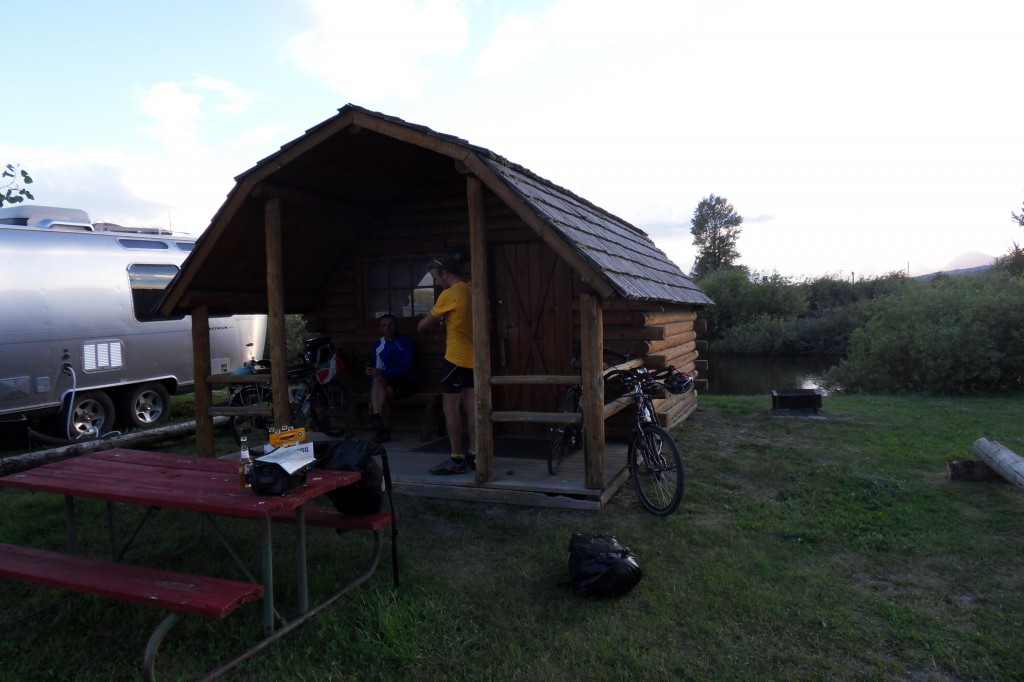