Today had the first genuine low point of the trip, it started badly and proceeded to get worse. I rolled out of my tent around 7am to the freezing cold, the inside of my tent had condensed so badly it dripped from the roof if I shook it. Me and Terry stood in the sunlight the second it rose among the trees to get warm. Having only a splash in the river last night for a wash I wasn’t feeling particularly clean, the porta-loo on camp wasn’t either. We went into town in search of breakfast to find everything shut down. The liquor store Terry went to last night was the only thing open. It seemed bizarre as it was a nice town which cleary had some tourist pull with the canyon and hot springs, there were at least 3-4 motels. 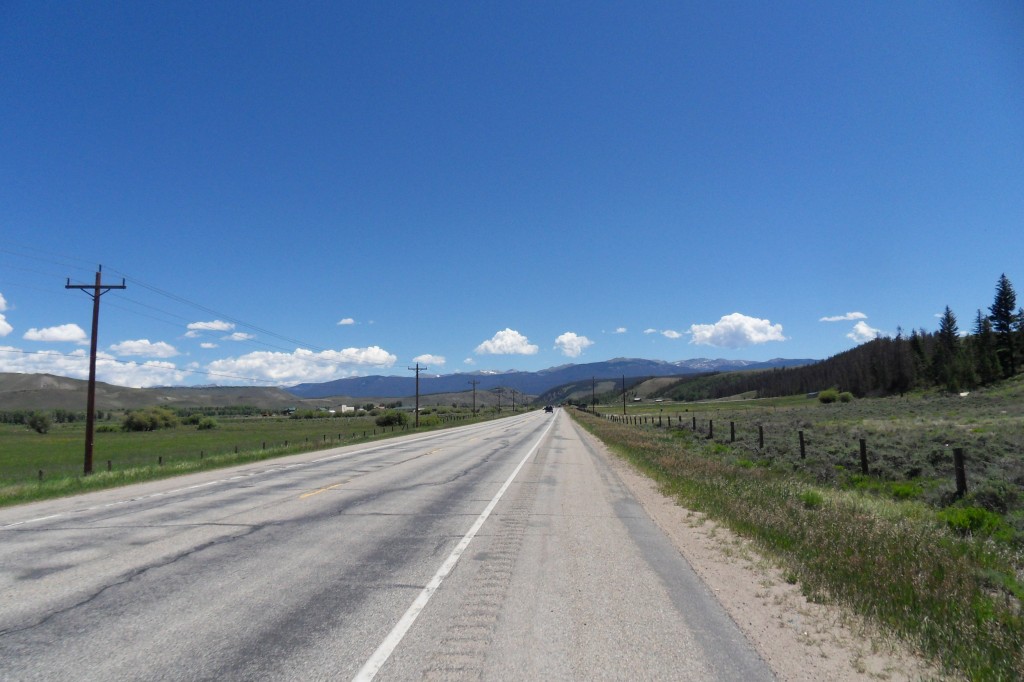 After wasting about an hour riding around town for food we realised our only option was to ride 3.5 miles off route to Granby, in total a 7 mile detour. On empty stomachs we rode on when only a few miles down the road a white pick-up came roaring past us sounding his horn violently. These occasions have been pretty rare all trip so we didn’t think anything of it, just another driver who feels cyclists have no right to be on the road. We see him pull in just ahead of us so I brace myself with one of those furrowed brow type aggressive chav face’s to show I’m angry and mean business. I roll past his truck without incident, he is on the phone. Me and Terry carry on bewildered but a further mile up the road we see a police car sirens blaring signalling for us to pull over with the white truck driver just behind him.

He steps out with the usual artillery strapped around his waist and comes strutting over. The pick up driver is about to join him when he shouts back to stay in his vehicle. He then informs us of the complaint put forward by the driver that we were cycling in the middle of the road, whereas we were as usual hugging the right hand side as much as possible trying to avoid the glass and debris on the edge of the road. He tells us the citation is all he needs to right us up a ticket which we would then have to defend in court. This is insane, he is threatening us with this based on one crazy drivers say so. The guy tries to walk over again and the cop tells him to back away, apparently he had to be calmed down several times as he was so angry about us riding on the road.

Once the cop gets our identification and realises this could be more hassle for him than its worth he goes to talk to the guy and then returns again. At that point I predict to Terry exactly how this will play out.The truck driver wanted to demonstrate some power and will now back down as to look like the good guy in the situation ‘letting us off’. I tell the cop I’m willing to apologise to the guy so he is then summoned. Me and Terry then have to grovel to the maniac who nearly just ran us down before he finally does as expected and says he is willing to let us go. The cop with a smug grin thinks he’s done a good job resolving the situation and we have to swallow any pride and ‘thank’ him for the cooperation. Its going to take weeks to shower the slime of my skin.

The whole ordeal takes about and hour and a half, at this point we have barely got going and are starving. After reaching Granby we grab gas station breakfast and push on. We entered the station for one entrance and blindly left it from the other which lead us onto the wrong road. It looked so similar we didn’t realise till about 4 miles up when the expected turn wasn’t coming. We head back to Granby in foul moods. This is the first wrong turn I’ve taken all trip. After getting back to the route we have done around 15 miles without even starting the days ride and its midday.

To make matters worse this was going to be a taxing day anyway with lots of climbing and then another pass. We wound our way up into the mountains again still furious with the morning. Some of the scenery was magnificent but I was barely looking at it. After plodding up to the peak we finally felt some accomplishment for the day and readily looked forward to what promised to be a gentle 30 mile downhill towards Walden. The elevation profile lied, after one initial downhill we had to climb back up again and this continued for a few more climbs before it eventually levelled out. It still seemed like tough work though and it wasn’t helped by the expansion cracks in the road every few feet which meant we had to almost break and crawl over each one. Whenever we stopped for just a few seconds a swarm of mosquito’s attacked so we just had to ride on. It was at this point when my head dropped and I had negative thoughts for the first time in the trip. Terry could tell something was up and asked if I was feeling alright. 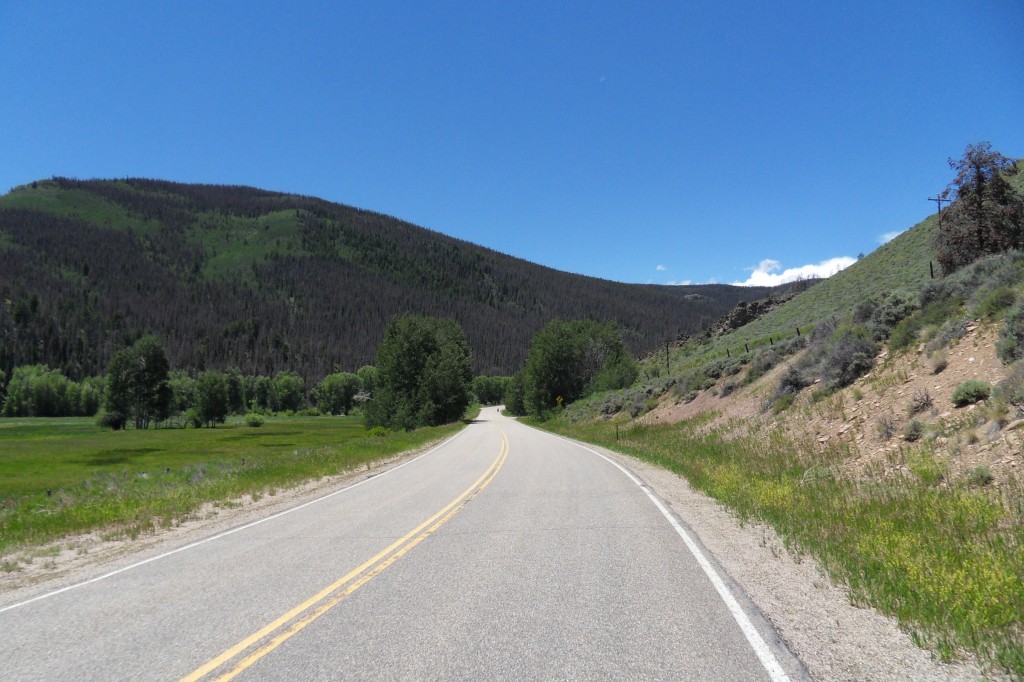 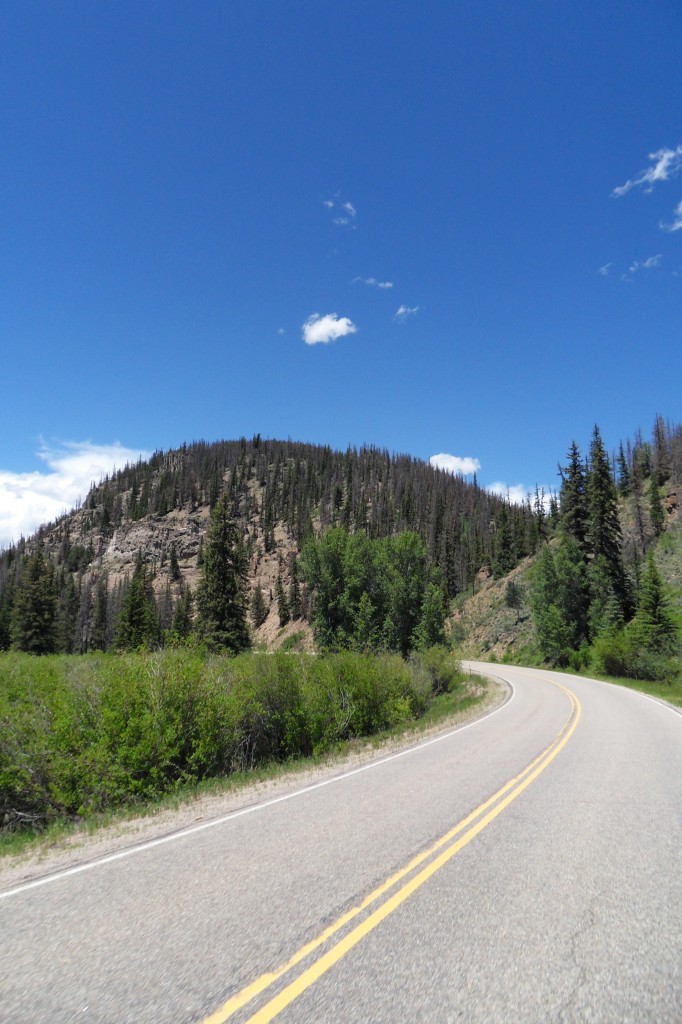 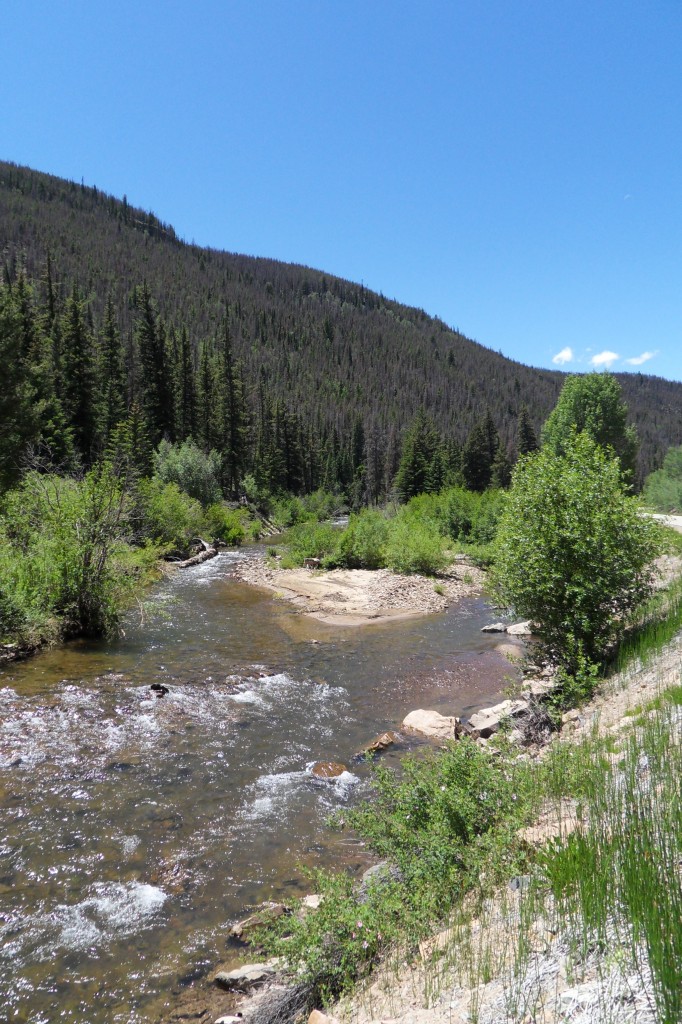 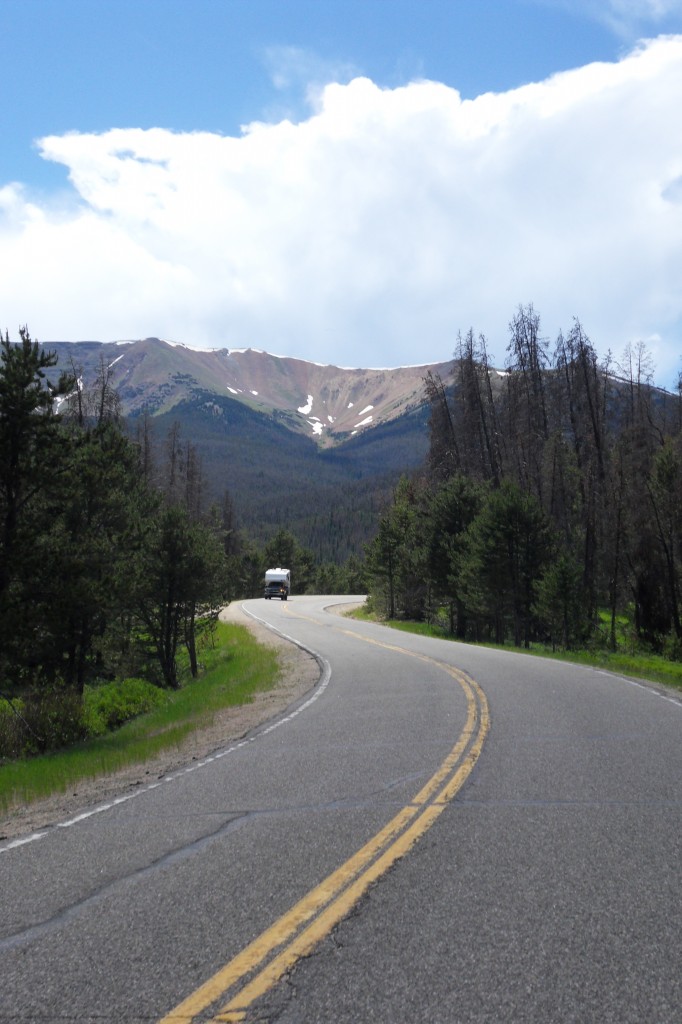 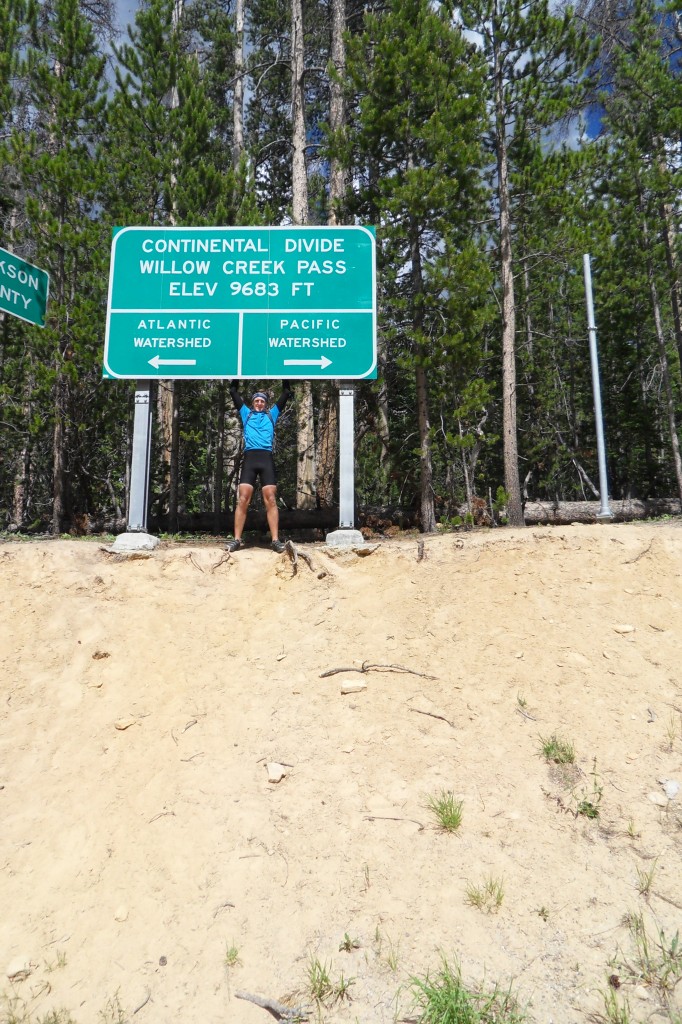 The miles crawled up as we averaged around 8mph limping towards Walden, I thought it was never going to come. Finally we see the sign and I let out a groan of relief. The city park offers camping but we both know its going to be a motel night so we get booked in at the first one we see, it has a laundrette and a hot tub. Much deserved. Finally cleansed and able to laugh off the events earlier in the day I’m amazed at how quickly things can turn around. 30 minutes ago I was cursing to the sky having the worst ride yet, now I’m happy as Larry. We treat ourselves further to a nice restaurant meal in town then I crash out asleep at the motel whilst Terry blogs away into the night. Today could only make us stronger for the rest of the trip. 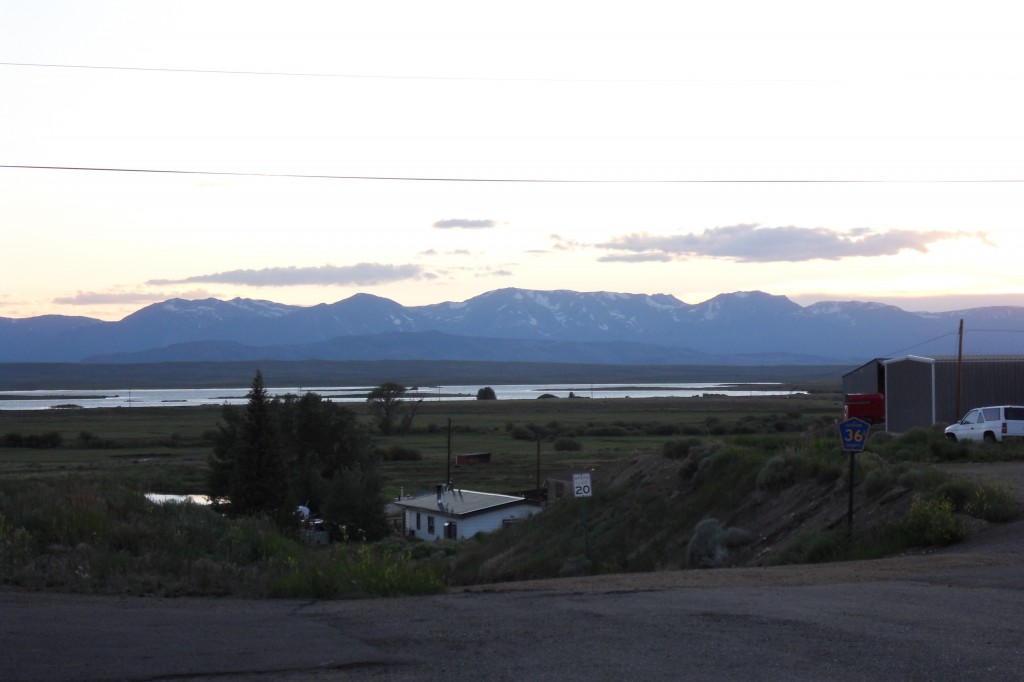