The sofa in the bike house was so comfy I slept soundly, then got up around 8am and fixed breakfast. June had said to go round anytime after 8:30am. She was up and ready with the door open waiting, she shouted to come right in. she seemed really happy and soon asked about the bike house, because she hadn’t been down to it for a while. I gave her a big hug and just before setting on my way she pointed me towards the table next to the door where she had piled a few things for me. Some chocolate bars, postcards of Virginia and another copy of her address so I could mail her. She then asked if I would come visit again before she headed up to her balcony to wave me off.

The climb continues straight after Junes house and she stood out to wave, as I climbed round the first few bends I looked back down to Afton and could still see her standing there, we waived one last time and I was off. Today was going to be the killer, for the past few days I had glanced over at the huge elevation profile forcast. I would be going up and over the blue ridge mountains of Virginia. Many previous TransAm cyclists I’ve read of have said these are as hard as the rockies despite the fact they are much smaller because of the gradients. 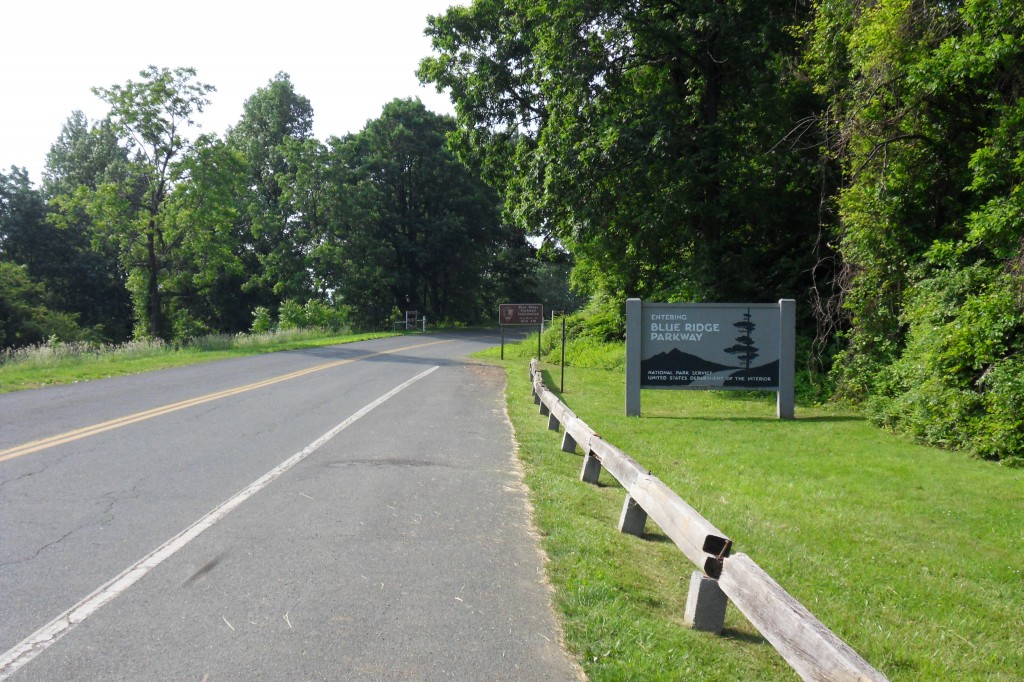 There are (look away mum) black bears on the mountain but apparently they are very rarely seen up here, so I didn’t see any. The climbing was really tough crawling up at 4mph, I was going no faster than walking. I stopped at the visitor centre for a rest stop and saw and adventure cycling coach pull in. The driver was leading one of the official van supported groups you can pay thousands to go along with. That option never interested me before the trip, he informed me the group is just behind me and will be staying in the small settlement of Love tonight halfway up the mountain. Thats exactly why I wasn’t with them, I want to have freedom of doing and going wherever I like. I planned on finishing the Blue Ridge in a day so sucked up some more gatorade and cranked out. 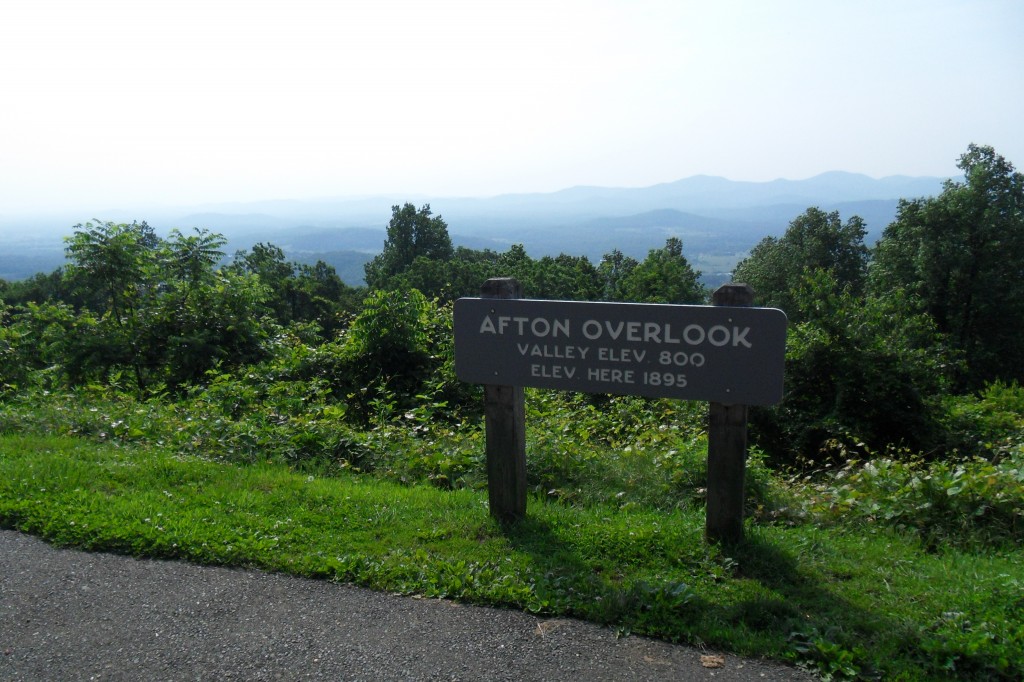 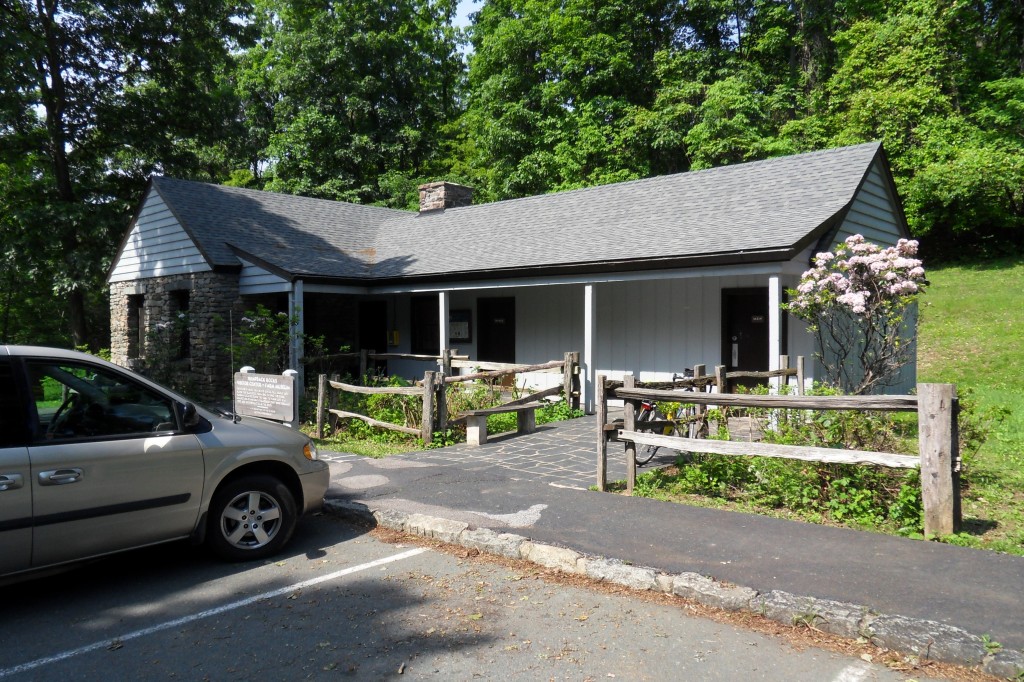 Further up I continued to stop at the spectacular lookout points and met another bunch of cyclists going the other way, they instantly offered to fill up my water an gave me a sandwich before telling me whats ahead, lucky for them it was all downhill now the other way. This is where things got really hard as I began to tire but the road just kept bending up. Eventually I made it to the top with the sweating literally pouring of my arms and dripping of the tip of my nose. Now for the fun part, I flew down the other side of the mountain to Vesuvius and what had taken about 3 hours to get up must have took no longer than three minutes to get down. 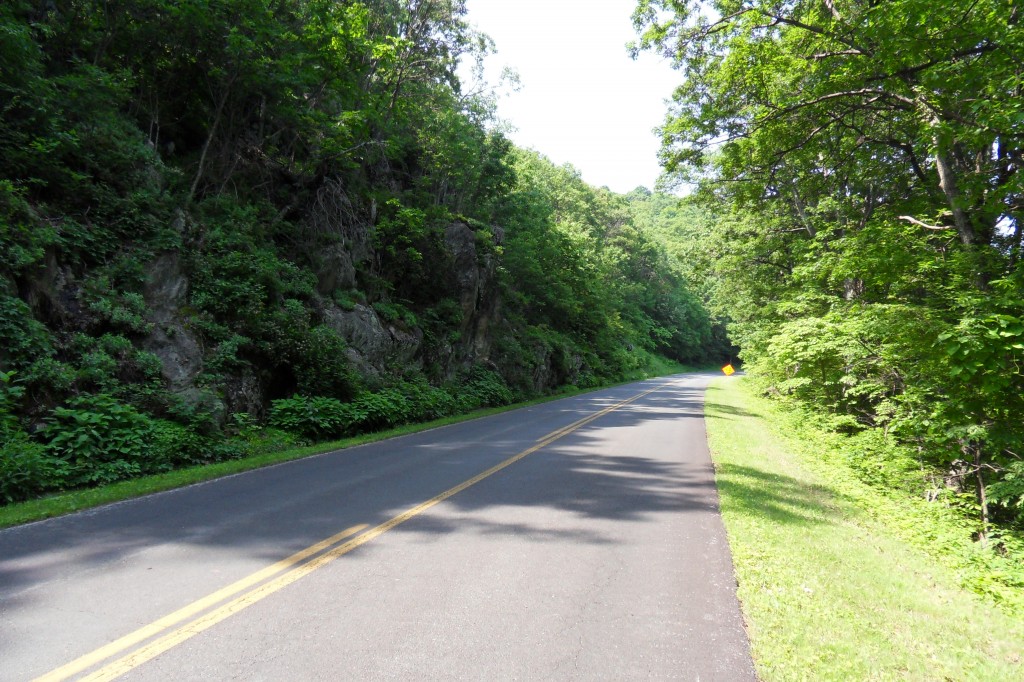 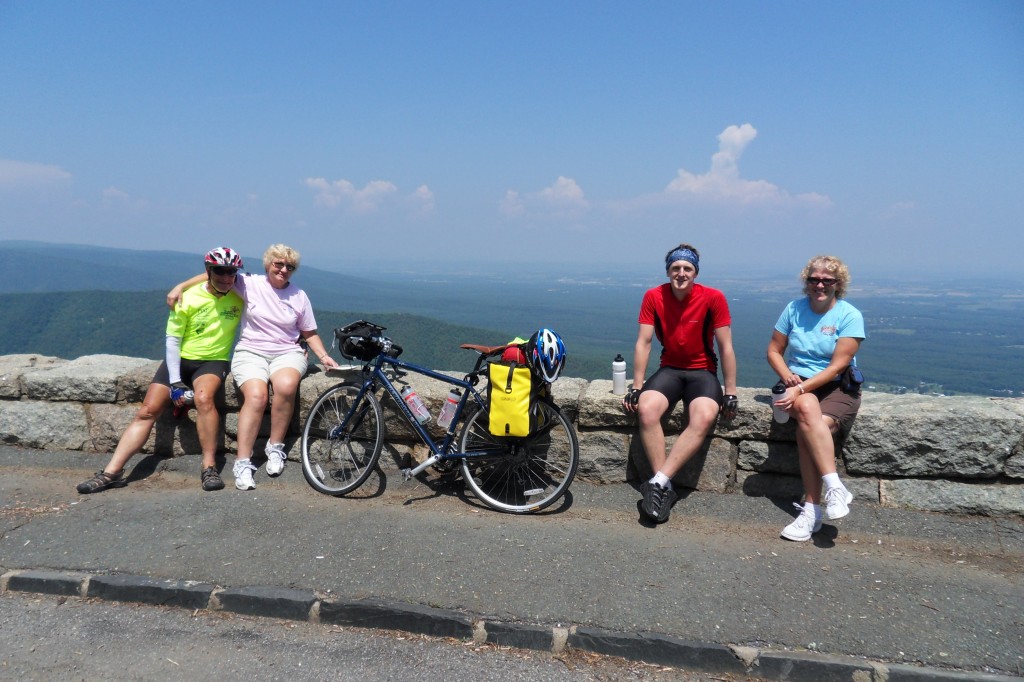 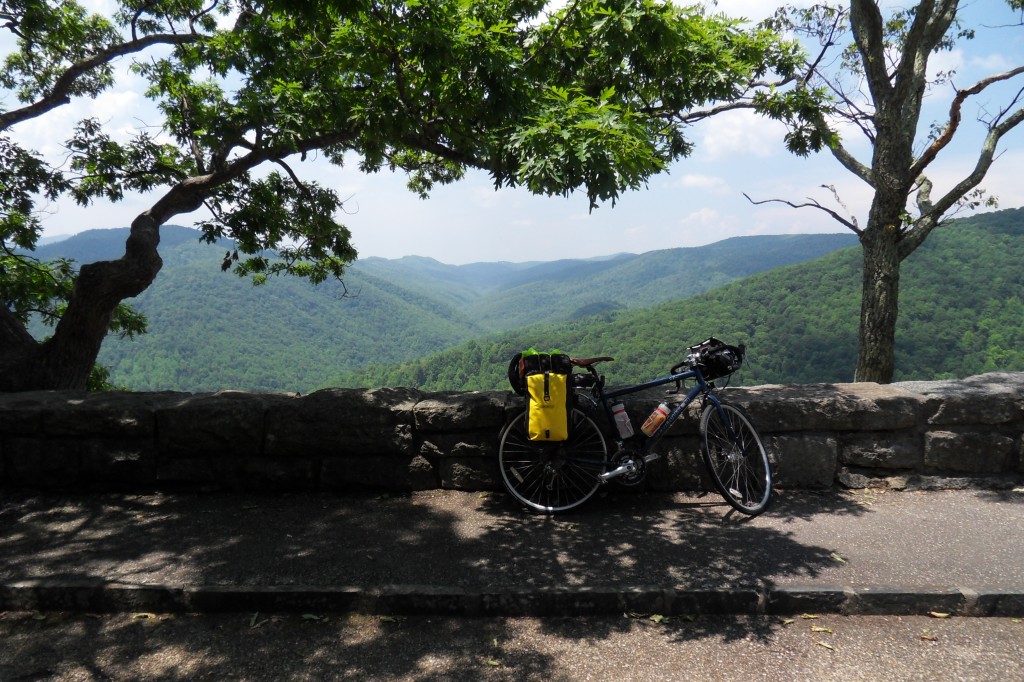 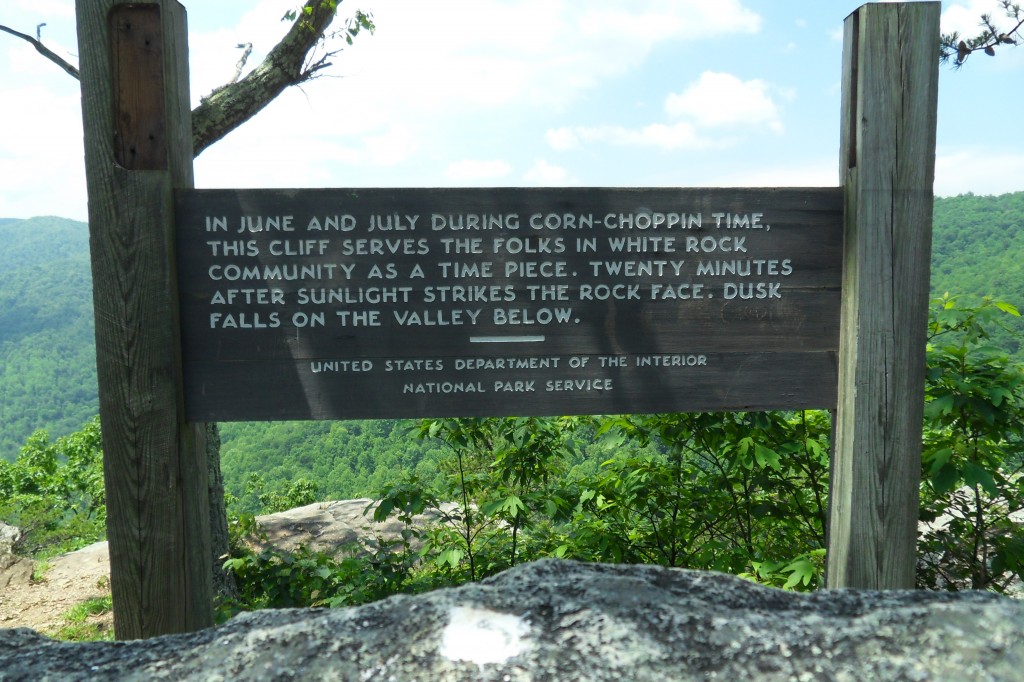 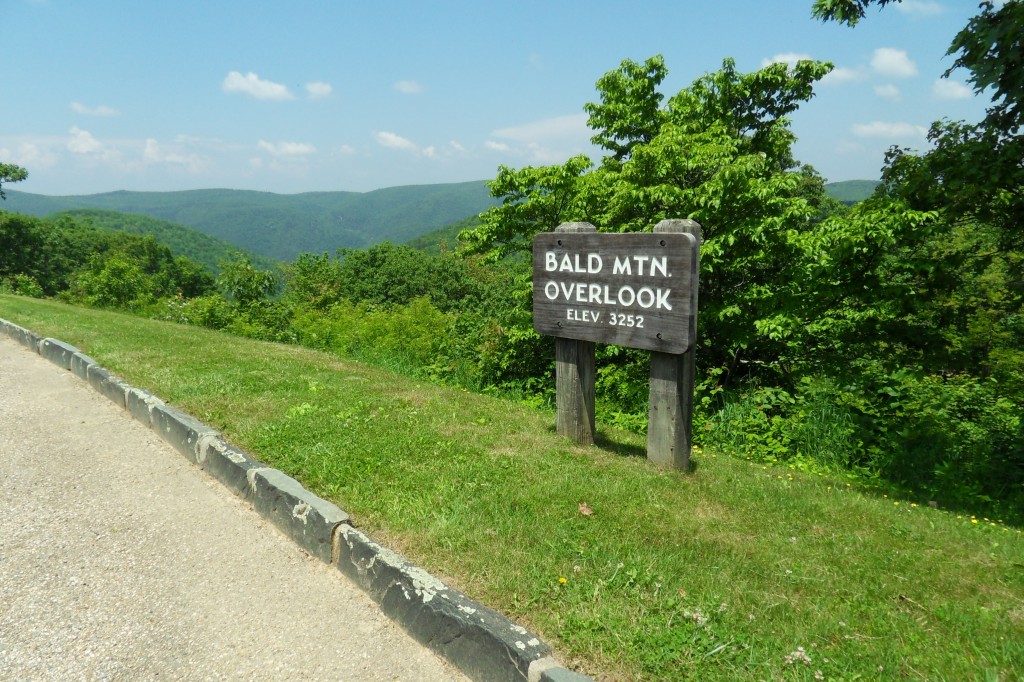 I knew I could camp at a place called Gerties in Vesuvius but went right through town without seeing it. I was only 10 miles from another campite so decided my exhausted limbs could make it. I arrive at the nicely named Mallard Duck Campground to find what seems like half trailer park/half rubbish dump with nobody in site or a store. Lexington is about another 10 miles away, can I go anymore? I ration my last half bottle of water out and set off again its only around 3pm. The weather and wind is now the hottest and warmest yet an can feel it burn right through the sun cream. 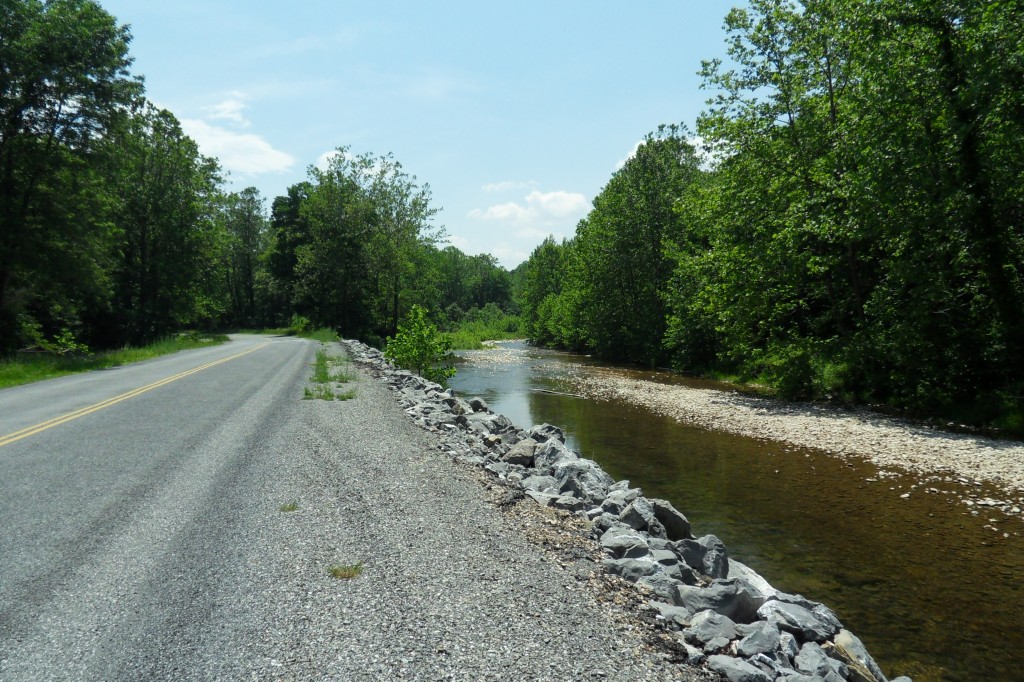 There was another big climb up to Lexington and cars flying past, its a fairly big town with more colleges and its graduation weekend. I walk my bike through town dripping with sweat and slightly sunburnt, everyone walks past and looks at me like an alien. Finally I get down to south main street and find the Red Carpet Inn (nowhere near as glamorous as it sounds). One final calamity, I somehow manage to drop my bike and fall with it cutting some of my fingers, so stroll up to the desk sweaty, sunburnt and blood dripping from my hand. But I’ve just turned a really tough 30 mile day into a 50+ mile day.

I shower, rub antiseptic into my fingers then order a large “The Meats” pizza and 2 litre bottle of sprite from Papa Johns for only $10! Whilst watching My Name Is Earl on TV, Heaven.