I knew today was going to be a shorter one so stayed in my comfy room until almost checkout at 12pm. I spent the morning strolling round town and had a sausage and egg bagel from a place Adam recommended last night. I would like to come back and spend longer in Charlottesville sometime, its a cool place. Over the past few days I have been looking forward to some sunshine, I would soon be praying for rain. It was in the 90’s by the time I left and there was traffic on the way out. As soon as my route took me onto a country road I pulled over in shade, lathered myself in suncream then spotted my first snake making his way across the road up ahead. 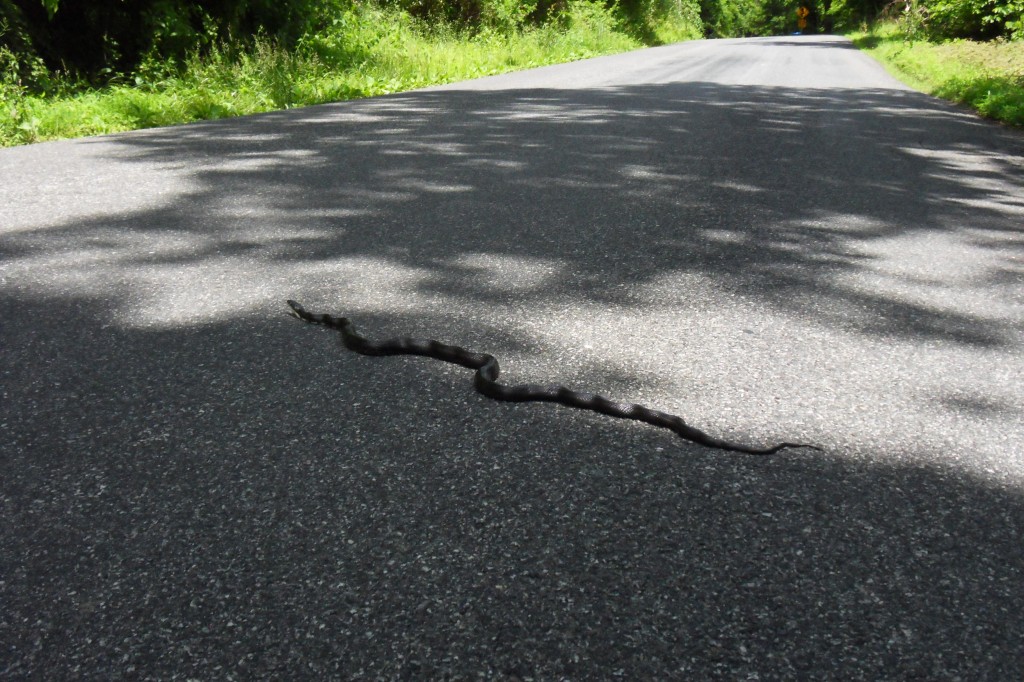 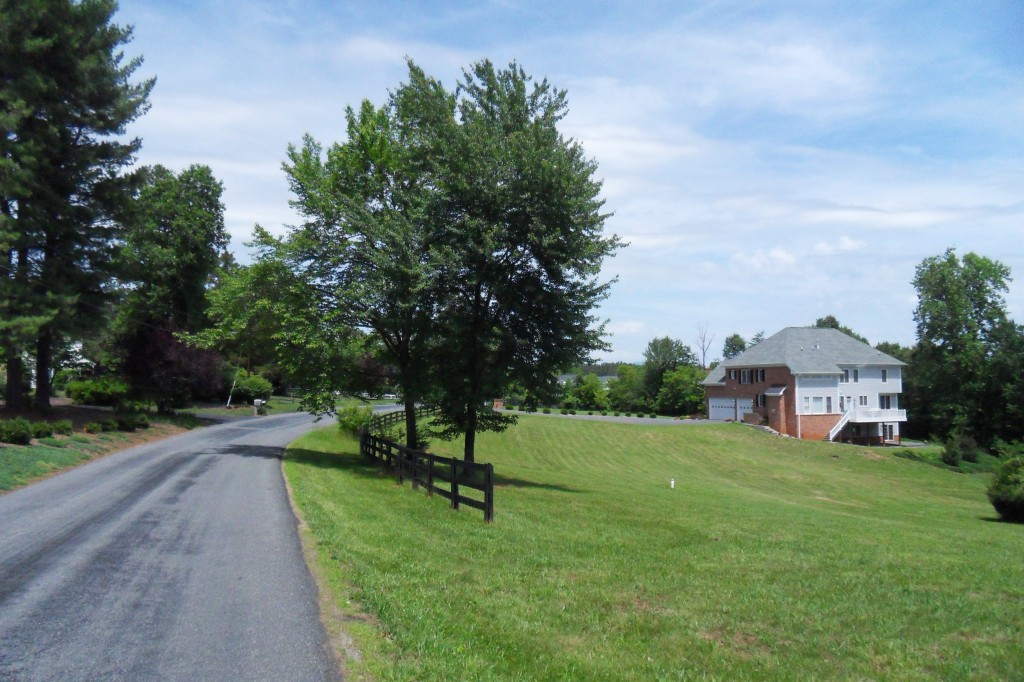 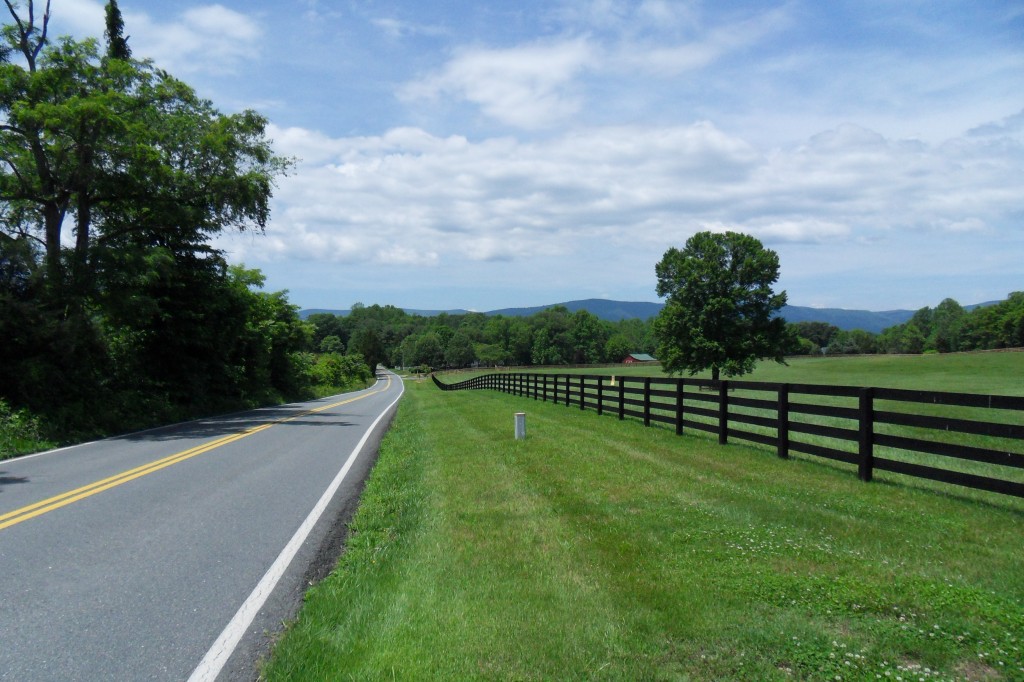 The riding was the toughest so far as the climbing increased again, not to badly though. I had to stop several times to get out the heat, first at Wyants Country store and then at a strawberry farm where I devoured a full box. Finally I was approaching Afton where the cookie lady, June Curry, lives. Its the top of a massive steep climb but I grimaced my way up slowly but surely and then saw the house. I couldn’t believe I had arrived at this place I had seen so many times on the internet. There is the bike house that holds memorabillia from TransAm cyclists way back to 1976, then her Dads old car garage sits dormant in the middle, whilst at the end of the row is Junes house. 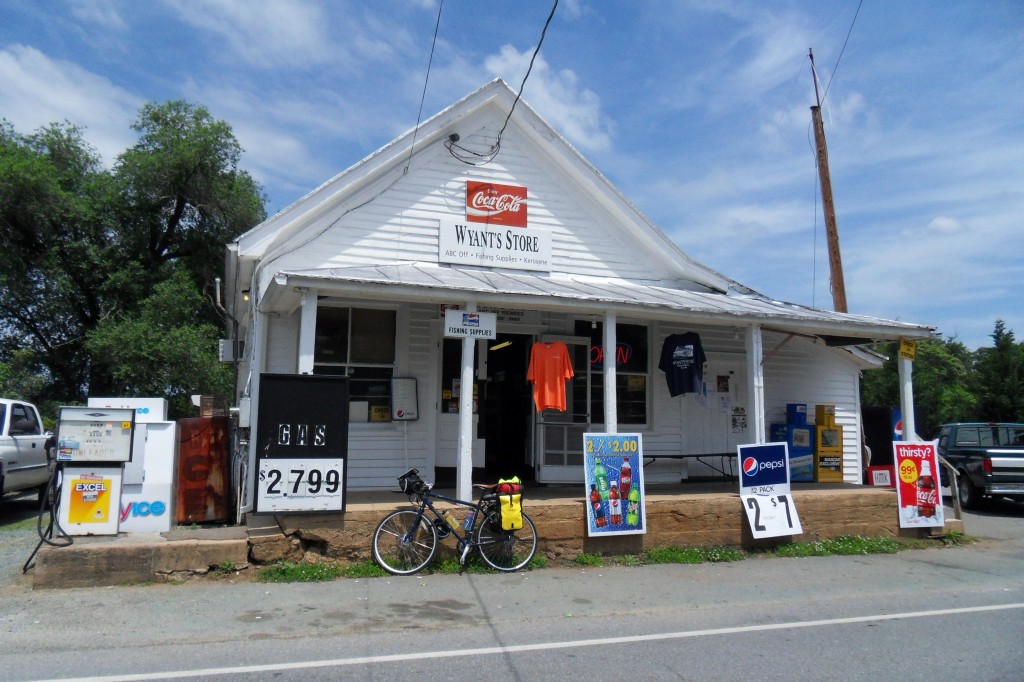 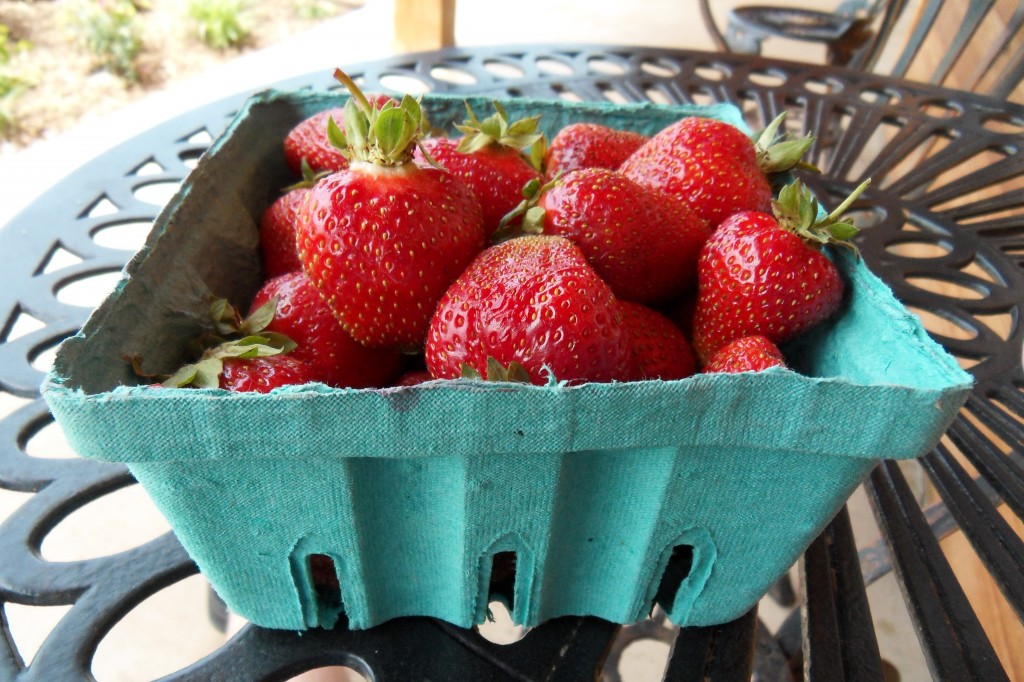 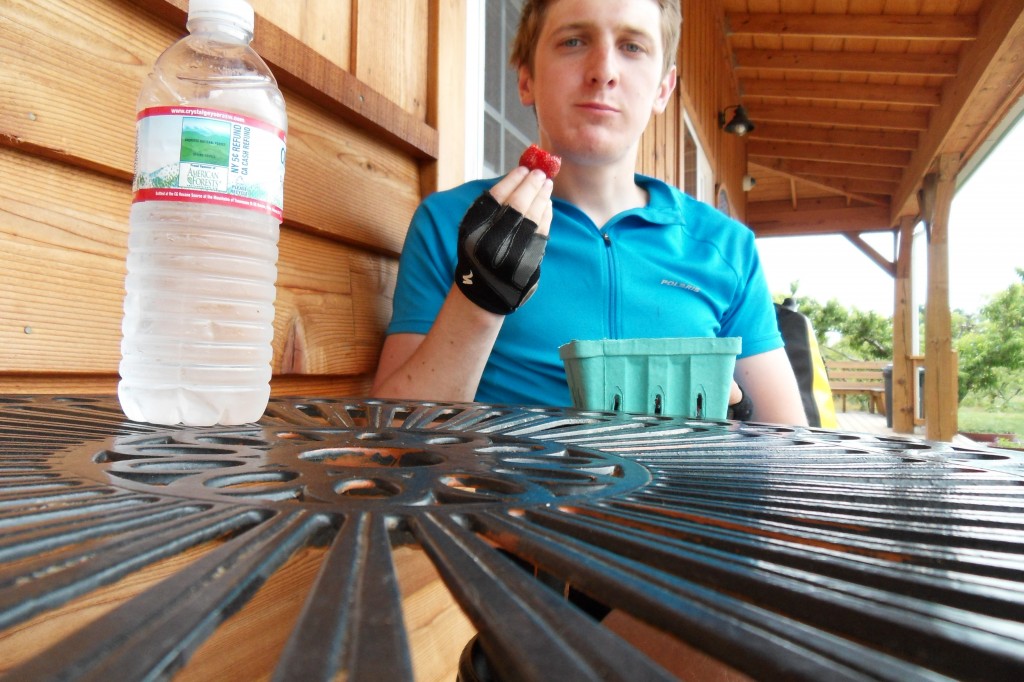 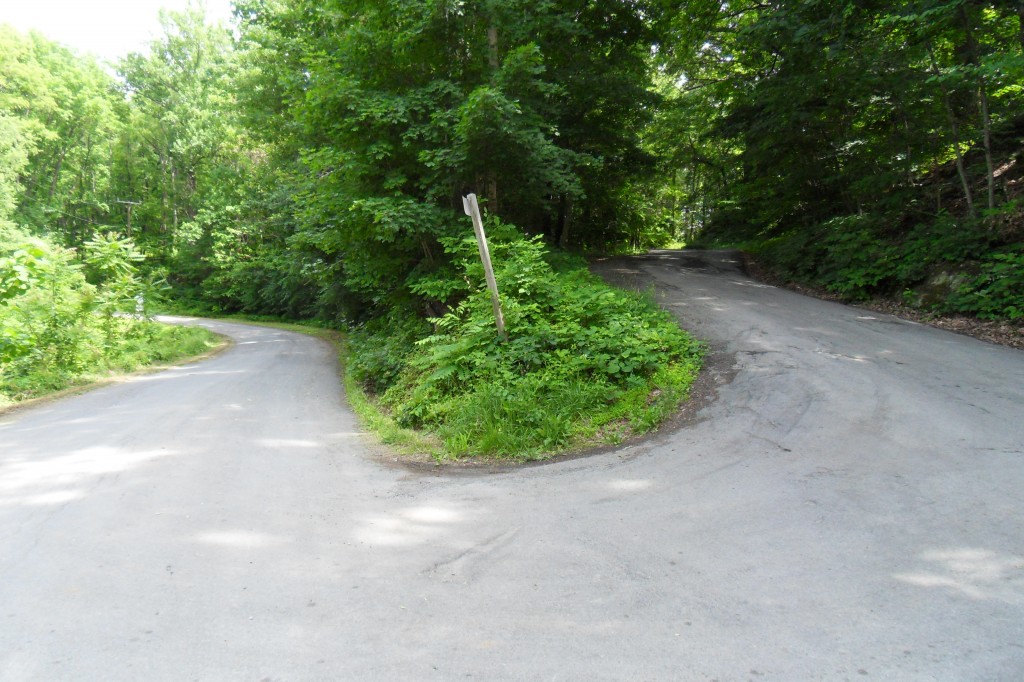 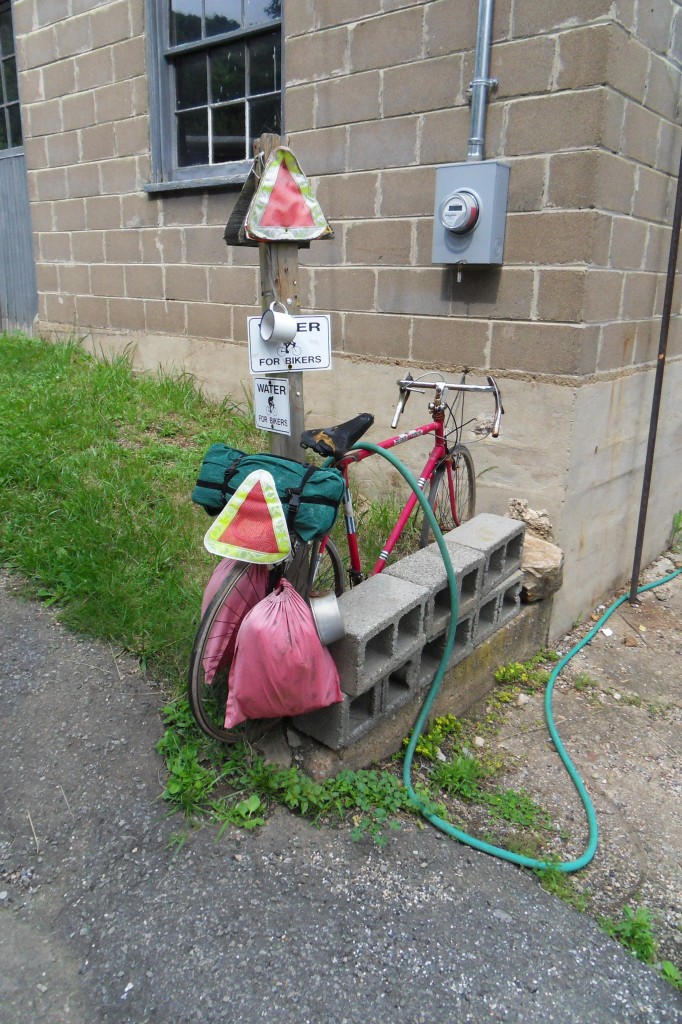 June is 90 now and had a stroke in 2005 and since taken several falls so I was concerned about bothering her and not sure what health she was in. I followed the sign and made my way round the back porch and rang the bell, then there she was with a warm smiling face. We sat an talked on the back porch for hours, I’ve heard she likes to talk but couldn’t believe just how many stories she had to tell! It reminded me exactly of the times I would go round my Gran or Grandmas. She told me all about the nice bikers shes had stay but also the state of America at the minute. She feeds the peacocks and the cats that wander around the back garden then returns with a set of keys and says “so you need a place to stay?” before handing me the keys to the bike house. She then invited me in her house and showed me tons of pictures of her family and Afton from when she was young.

June instantly changes you in a way you couldn’t imagine, it feels like I’ve got a third grandma and known her forever. She began to get upset when telling me of her health and financial problems, she is desperate to keep the bike house open even though she can’t afford too or able to run it. She has a friend called Debbie who comes by a few times a week and helps out, but this is really all June has left. She never travelled and is not able to now so she travels through the stories that all the cyclists bring her. There is no charge for sleeping in the bike house she only asks for a donation. I grab my wallet and give her in cash exactly the amount of money I would have paid for a motel room. She was shocked and held my hand tightly thanking me, apparently this year hasn’t been so good for donations so far. I can’t believe some of the cheapskates ahead of me on the trail would give her any less!

June then tells me a thousand times to take as many apples, sandwiches and candy from the bike house as I can carry for the big ride tomorrow before informing me of what lies ahead. By this time its getting really late, I can tell she wants to sit and talk all night but I’m still sweaty and starving from when I arrived 4 hours ago. I go and get cleaned up before taking in every room of the bike house. Its a living museum, the pictures don’t reproduce the crazy feeling of strolling through room after room of bike shirts, postcards, stories, photos stuck to the ceiling, wall and cupboards. I sign my name in the register and see 5 other bikers on the TransAm stayed here 2 nights ago.

I fall asleep on one of the sofas thinking about June all alone in that house and I feel helpless and heartbroken. What does she do during the rest of the year when nobody is stopping by to see her? I take one of the business cards in the house with her address on so I can send her postcards and more donations.