So today started well enough, I felt great still following the big ride yesterday and spent the morning casually updating this blog. I got on the road around 9am and was cruising the first 5 miles when disaster struck. 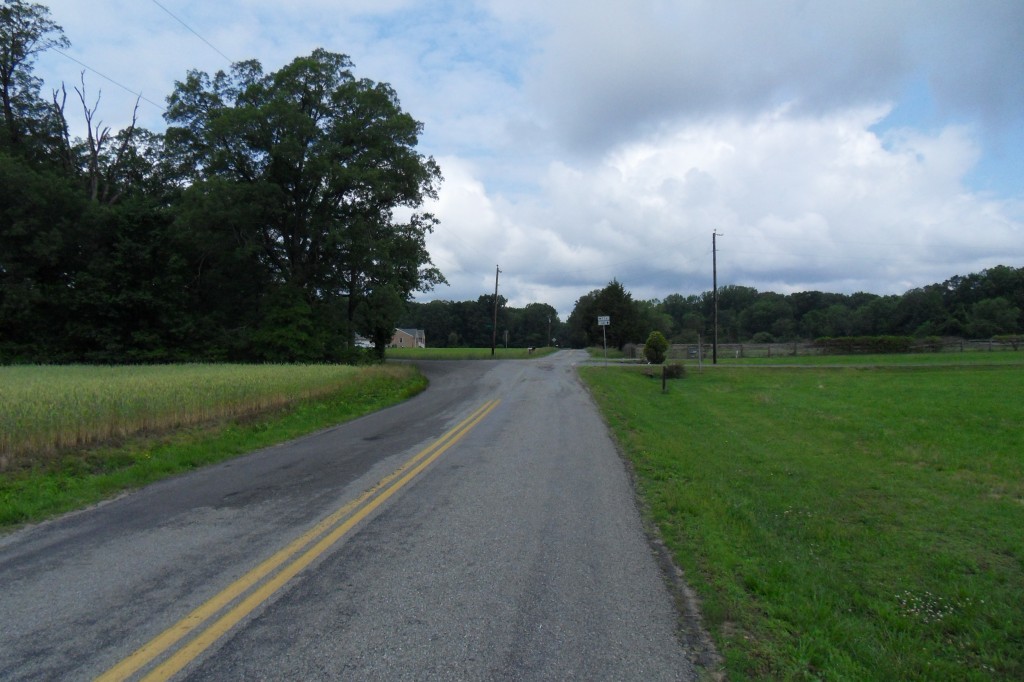 I was about to start climbing up a big hill and dropped down to my lowest rear gear for the first time on the trip. All of a sudden the bike jammed and made an awful metal bending sound. I stop and assess what happened, my rear derailleur is bent in towards my spokes and my chain dangling all over the place. What the hell just happened! I take my bags off and flip my bike over, my sleeping bag and mat roll down the hill I had just started on.

I try to stay calm but I’m sweating like hell and it looks REALLY bad. A closer inspection shows the dropout on the very end of the frame has completely bent inwards towards the spokes and drivetrain. I know immediately that this is unfixable and would have to go to a bike shop.

I can fix spokes, flats and chains but this is crazy and I’m still trying to get my head around how my steel frame has just bent itself inwards. My heart sank as I had been enjoying the riding so much and knew how serious this was. So I tape up my chain and derailleur to the frame, turn the bike around and start walking back to Ashland. I figured this would take about an hour, I free-wheeled down any slopes but had to push it up a few hills.

It was still early Sunday morning so not many people were out, EXCEPT for cyclists :D. A guy coming the other way sees me walking my bike and asks me if I’m ok. I told him no and explained what had happened, his name was Wat, and he gets out his phone and starts making calls straight away. I felt completely helpless an knew this guy was my only real hope. He must of known too because even though he had plans of his own he wasn’t going to leave me till I was sorted.

At this point another cyclist pulls up called Troy and discusses my options and tells me about a few other bike shops, there aren’t any in Ashland so I would need to get to the next city Richmond, about 15 miles. Wat only lives 2 miles away so cycles home to get his car. He returns swiftly honking his horn, a true American hero. We load my bike up and he drives to Peformance cycles first, at this stage I can either try get mine fixed or think about replacing the frame. They don’t stock the right type of frame for me but point me in the direction of Conte’s Bike shop who might be able to fix it.

They check the bike and say they can fix it although they are fully booked up for the day but can see I’m pretty much stranded so offer to get it done by 3pm. Relief washes over me, Wat even suggests we go for food to kill some time and at this point he has already halted plans with his wife for their Sunday so I can only apologise again for that and make sure I cover the bill to at least repay him a little. Not only was he incredibly helpful he was also tuned into some great music, the short time we were in the car we had Phoenix, Passion Pit, Anberlin, Arctic Monkeys, Kings of Leon!

Before returning to Conte’s I nip to the shop to grab a crate of Newcaslte Brown Ale for the guys to thank them for squeezeing me in. On returning they tell me straight away I’m all sorted and ready to go, I can believe they have fixed me up so quickly. They trued my wheels, sorted my spokes, fixed my bend and even fitted a nice new Shimano Tiagra derailleur all for under $50!

One of the guys even gives me a few spare allen keys that I don’t have on my multi tool. They explained the reason it happened was because the stopper on the derailleur that prevents it from bending into the spokes wasn’t secured. I don’t know why this was but it must have been done when my bike was boxed up. I only had a problem today because it was the first time I had used my lowest rear gear so it buckled and just pulled everything in. I was assured it would not happen again and took a test ride before grabbing a taxi with a great driver called Charles back to the motel I was at last night, tomorrow I will head to Mineral once again.