Why Would I Want To Cycle Across America?

“Your doing what!?” – that’s the usual response I get when telling people I’m spending this summer cycling across America. Most of my friends are now well acquainted with the idea, possibly even bored sick with my constant talk of the trip.

The trip itself is a culmination of a 3 year dream that first presented itself in 2007. At the time I was researching for another trip across America by car, when I found a journal documenting a guy who had cycled across. In the following weeks I became fascinated by the idea of doing something so big and different, but to this day don’t have a straight response for ‘why’. 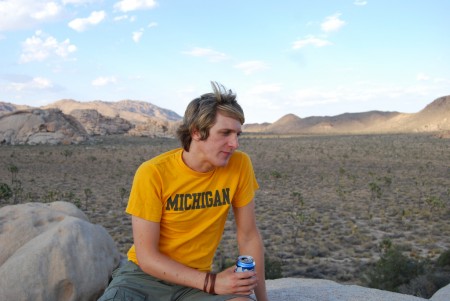 A couple years and summers later I had finished my degree and got a job and felt the chance of taking the trip slipping away. It was then I decided there was never going to be a convenient time to take several months out of my life. After both my Grandmas passing away in the space of a year I really began to take stock of my ambitions. I couldn’t wait any longer, the trip still consumed my thoughts, it had to be done.

So skip to present, I’m ready to leave everything behind and on the 17th May 2010 I will be flying to Yorktown, VA and begin cycling to the pacific ocean. I will be following the Transamerica trail established by the ACA back in 1976.

Having spent several months travelling around the USA in previous years, this route still manages to go through all the states I haven’t visited except Illinois. Riding with a fully loaded bike, I plan on camping around 2/3’s and staying in motels the rest. Despite going alone I also hope to meet and ride with others along the way.

I read elsewhere another TransAm cyclist saying that people who ask why your going on such a trip probably wouldn’t understand if you told them. I guess I want to test myself away from the security of normal life, to live a life without walls and limits and finally live out my dream.

19 Replies to “Why Would I Want To Cycle Across America?”